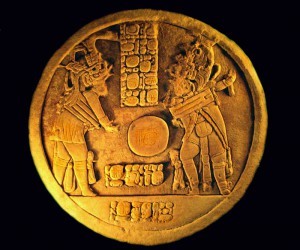 Arthur and his team were instrumental in making sure this ancient monument, a carved stone ballcourt marker, was not moved out of Guatemala and sold on the black market.

Trafficking Culture documents the events and has additional links that may be of interest, including one describing the Cancuen Panel, looted from the site sometime before 1981.

The LA Times tells the story in detail. You can read it here:

SFGate has the story with some excellent photos: