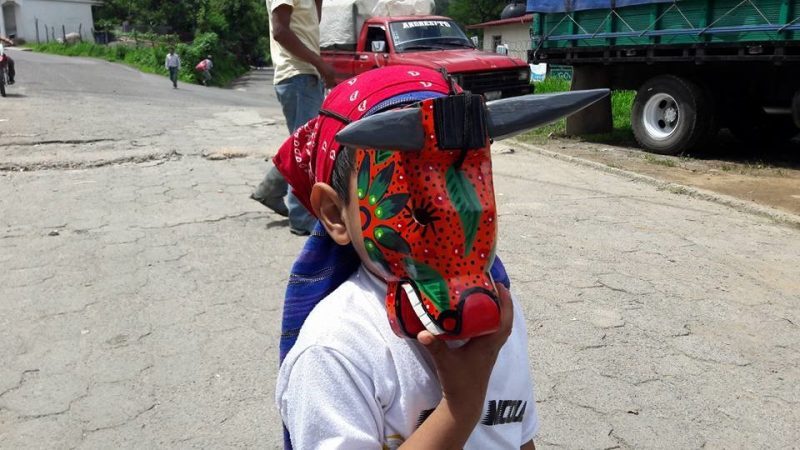 It seems like at any moment another ritual might “breakout.” Just a couple of days ago, I found a rare moment of peace to write up some of our findings.  Those plans were truncated by a sudden cacophony of drums, flutes, and marimba, punctuated by deafening explosions of plastic bottle bombs.  My “San Andresana” wife, Vilmita, casually said that it was the “rito de San Juan y los toritos” (the ritual of San Juan and the little bulls” also called “Los Negritos”) and she ordered that we had to go to it immediately!  We were then swept away into the Kaqchiquel universe.

The streets were filled with the dancing townspeople in truly bizarre costumes  – first in ordered lines, then suddenly shifting into strange parodies of Spanish bullfights, and then periodically all going berserk into wild shouting, leaping, and gyrating while big two-gallon empty plastic coke bottles with huge fire crackers stuffed in them exploded everywhere! You can see video of this here.

As an anthropologist I was trying to comprehend what the hell was going on.  I realized that this was probably a celebration long evolved from an ancient summer solstice ritual, given that this fiesta and its rites ran from June 22 to 24nd. Like many Maya rituals and beliefs, after the Spanish conquest it probably absorbed the canons and events of the Catholic ecclesiastical calendar.  Maya rituals are not fossils from the past, frozen in time, but rather are manifestations of living, vibrant, Maya spirituality.  Like this one, they gradually add or modify many elements to adapt to the times.  In this case, it is clear that during the Spanish Conquest and Colonial period the Kaqchiqueles added to their dances what we anthro types call “ritual humor” used to mock their Spanish overlords in a way that the Spaniards themselves would not understand. And so, the Maya would not be castigated, or even killed, for performing such public satire.

In this particular celebration, the San Juan “Toritos” or “Negritos” dances must have been mocking the Spanish cattle ranchers of the region who occasionally had their own local ranchers’ bullfights.  That’s why, in these rituals, the main dancers were done up as really over-the-top “Monty Python” versions of toreadors with ridiculous masks and garish capes, while others were costumed as Warner Brothers cartoon versions of black bulls that were charging the absurd toreadors. The crowd of dancers surrounding the toreadors and bulls represented the Spanish audiences at those rancher’s bullfights who would presumably cheer and wave after some exciting move by the toreadors. The Colonial audience were parodied by the dancers right in front of their eyes, as the Toritos and Negritos would suddenly break into frenzied disordered dancing, yelling and shouting and jumping about like lunatics!

Apparently, the Spanish ranchers seemed totally ridiculous to the Colonial period Maya. That’s why the dancers representing the Spanish audience were done up in laughable garb.  But, as I said, these are living ever-changing Maya events, and so in the current version the Spanish bullfight “audience,” dancers had “modernized” their costumes by tying mops, Teddy Bears, plastic ducks or stuffed Mickey Mouse toys to their heads. Whatever made them look most ludicrous!

The festival went on all day and when sunset came we were invited to continue with dinner and drinking with some of Vilmita’s old friends, including one of the leading spiritual guides and his family. There followed five hours of eating the most delicious tamales flavored with an herb grass called “chipilin” while downing cups of their home-made “cusha,” a powerful fruit punch with the effect of nitroglycerine! I was informed at the dinner party that the rito would continue for two more days.  I despaired that I would never have any time to do any archaeology at all, given my obligations as Vilmita’s husband (“gringo-in-law”) to participate, albeit on the margins, in these events of her extended family and friends.

In this case, the Maya ritual and family relations proved to be a very effective form of archaeological reconnaissance. Vilmita’s Kaqchiquel friends and relatives began telling us where all the ancient sites were in the entire valley.  At that first ritual dinner, I was told by our host that there were big ancient tombs (“tunnels” he called them) in his yard right behind us and also on the adjacent lands of his brother and of his cousin.  I was skeptical, as always, of such local claims, since they usually prove to be modern or late colonial pots or even simply a horse skeleton at the bottom of an abandoned well. However, our host then said that they had kept all the artifacts, since the spiritual leaders had decided that these were holy relics which should never be sold and never leave the San Andres Semetabaj town area. When I requested to view them, they laid on the table the most incredible things, including a beautifully carved and polished hardstone mortar in the shape of a turtle with an anthropomorphized head and face. The other objects were perforated large banner stones, figurines, or grinding tools.  Despite the hallucinatory effects of their cusha, after 30 years as an archaeologist, I can state definitely that these objects were from about 700 to 400 B.C., the same dating as the largest pyramids and occupation of the nearby San Andres Semetabaj site center that we have been excavating. After talking to their other relatives it became clear that their houses were all sitting on a 2,600 year old Middle PreClassic cemetery!